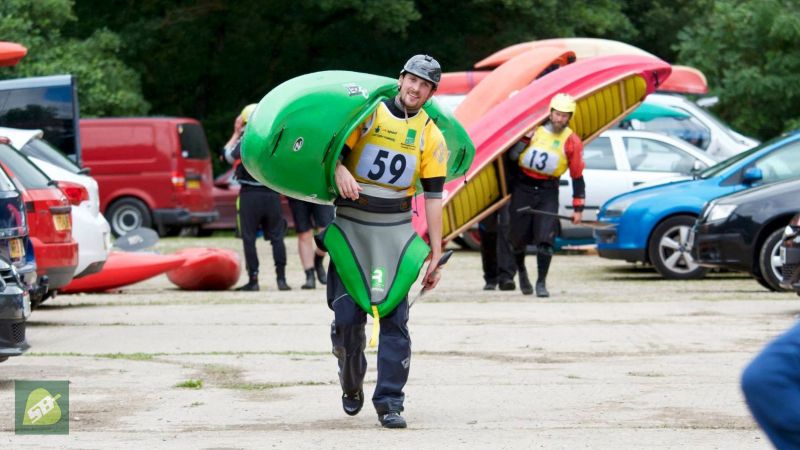 Boater-X events come in all shapes and sizes, but the one at the recent Silverbirch-Canoes sponsored Washburn Boaterfest 2016 was all about fun and carnage... with very few rules, lots of dodgy starting tactics and assorted, often impressive efforts at sabotage, especially just after the first bridge!

We could have produced an excellent handbook on underhand tactics by the end of the first run. After that, the tactics got even dodgier! Highlights included Mat Howes popping Matthew Pritchard's skirt (the spraydeck on his Zet) on the grounds that decks on canoes were "cheating" - and then going on to sink him in the "trad" race :o

Initial heats were in groups of four, on a knock-out basis... and competitors were invited to arrange their own groupings. We had K1, C1 / OC1 (little canoe) and "Trad" (big canoe) classes, and mixed races, and also entries on Tootega Catalyst Sit-on-Top and on a Soul Firestorm Stand-Up-Paddleboard - neither of which have traditionally been seen on this water!

During the open canoe races, the Washburn was truly, as Philip Thomas Carr noted in his "Unsponsored" blog, "taken over" with Silverbirch Coverts... but we also had Mat Howes with Bob Mckee (aka "King Bob" following his King-of-the-Alps triumph) in Hou Canoes Dropzones - and assorted boats from Mad River, Esquif, etc.

We eventually ended up with a crazy  C1 and OC1 Final:


Congratulations to Kelvin Horner on emerging victorious, and thanks to Chris Brain, Matt Taylor, Dougie Porter and Ryann Quinn for chasing them down the river, and to Mat Howes and company for adding to the carnage through interventions as the competitors went for the banner in the eddy!

Unsurprisingly, the "Trad Boat" final was even crazier. Initially we had just one entry... but a moment or two later we were starting a race with seven boats... of which six managed to miss the required touch on the banner resulting in a slew of 30 second penalties!

Results of the "Trad" final:


Special mention to Matthew Pritchard and Mark Fallon for completing most of the race (and crossing the line) in the water after suitably underhand tactics led to their boat swamping and sinking - much enjoyed by many :)

Of course, not everyone was using a single-blade, but following kayak heats, the K1 competitors elected to dispense with kayaks and eliminate boat-advantages by running their final with everyone using WW spec Tootega Catalysts Sit-on-Tops!


Special mention to Chris Brain, who competed valiantly despite having virtually no turnaround time following his OC1 exploits!

Prize-giving was c/o Silverbirch Canoes / Tootega Sit-on-Tops / The Boathouse... and was entirely in the spirit of the event, with a lucky dip. The dodgiest prize was a bunch of sausages, as won by Dougie Porter, but Bob Mckee emerged victorious with a superb Soul Firestorm Stand-Up-Paddleboard. His craft for next year's "King of the Alps" race?

On which note, we invite photos, video clips and more. Lots has been shared, but much within "closed" social media groups. Fortunately, many of the photos and video have already started coming together on the Song-of-the-Paddle Blog of our associated "Big Meet" weekend: http://www.songofthepaddle.co....

That's about all, but thanks once again to all who entered into the spirit of the event and celebrated the carnage, to the volunteers from Pennine Canoe and Rowing Club (David Jefferies, Pete Lawton, John Gilbert, Matt Mohawk Beck, Elizabeth Anne, Gina, Eleri and co) for hosting the event and providing the catering.

A very special thanks Mark Wainwright of Robin Hood Watersports for furnishing demo boats and to Justin Snell's Hou Canoes Team of Mat Howes & Bob "King of the Alps" Mckee for bringing along the prototype Dropzone (and the new Prospector) and contributing so wonderfully to the carnage.

More thanks go to all those who beaver away in the background, pretty much year round, to make these events possible: Washburn Committee Chairman Norman Taylor, his sparring partner, Chris Hawkesworth, Event Safety adviser Les Ford, Yorkshire Slalom stalwarts from Greenstar Canoe-Club, Stephen Henderson and many more.

Thanks most especially to Steve Childs of  Silverbirch Canoes and Tootega Sit-on-Tops for providing guidance, flags, boats, prizes and (not least) many photos (see gallery, above) - which include a few from angles none of the rest of us could manage!

Trusting we'll see you all on the water (including you, notable absentee Matt Blackwell) for another such event before too long :)