Struggling against powerful roaring waters, eddies, swirls and stoppers; Canoe Slalom sees athletes battling the forces of pure nature. For many, Canoe Slalom is the ultimate challenge; a gruelling test of speed, agility and precision with all the excitement of whitewater rapids. Canoe Slalom translates brilliantly to the TV screen, and for spectators who are close to the river, the thrills are intense.

300m of excitement: Paddlers must navigate a sequence of gates in number order set up over challenging rapids, waves, eddies and currents on a 300m stretch of whitewater. The gates consist of pairs of poles, if the paddler touches a pole or misses a gate altogether then penalty seconds are added to their timed run (2 seconds for touching a pole with any part of their body, boat or blade, 50 seconds for missing a gate).

Different boat types: There are two boat types, Kayaks (K) and Canoes (C). In a Kayak the paddler sits and uses a double ended paddle. In the Canoe the paddler uses a single bladed paddle and kneels.

Different disciplines: There are Kayak events, for men and women, in single (K1) boats, and Canoe events in single (C1) and for men in double (C2) boats (the C2 category will no longer be in the Olympic Games after 2016).

Team races: In the team events, three boats (K1, C1 or C2) start together and the athletes decide who leads and who follows. The three boats follow each other and negotiate the gates in the quickest succession possible. The time of the run is recorded as the last boat crosses the finish line.

For men and women: Traditionally Canoe has been exclusively for men but there is a growing women’s contingent and Women’s C1 will be included as an Olympic discipline for the first time at the Tokyo Games in 2020, replacing the men's C2 discipline.

Joe Clarke made history at the Rio 2016 Olympics winning GB's first Kayak Gold Medal in the Men's K1.  Following the Rio Games GB's Olympic medal haul in Slalom now stands at nine.  2016 was the most successful Olympics going one better than the Gold and Silver medals won in the C2 at London 2012.

Extreme slalom first appeared on the ICF’s World Cup programme in 2015, and since then the growth has been phenomenal.

Extreme slalom is a combination of all canoeing’s white water disciplines, with competitors racing in identical plastic creek boats. >span class="apple-converted-space"> From there it’s a race to the first buoy, and it really is a case of anything goes as each paddler tries to steal an advantage over their opponents.

Athletes need to negotiate both downstream and upstream buoys, and contact is allowed – adding to the thrills and spills and excitement for spectators and athletes alike. Then there’s the compulsory eskimo roll. Athletes only have a short window of opportunity to successfully roll their kayaks, and they need to do a complete 360 degree flip.

There are a variety of ways to get disqualified – breaking the start, missing a buoy, dangerous paddling, and failing to complete the eskimo roll within the allocated area.

Most races are over in around a minute, but times are not important. Extreme slalom is very much a race of tactics, and often it does not pay to lead early. Athletes also have choices to make, including which side of the course they should take.

Extreme slalom will feature in at the 2024 Olympics and part of the funding we receive from UK Sport will go towards supporting our athletes and coaches to Paris. Joe Clarke became World Champion in the men’s event in 2021 and Nikita Setchell also took Gold at the Under 23 World Championships earlier in the year, demonstrating our potential in the event. 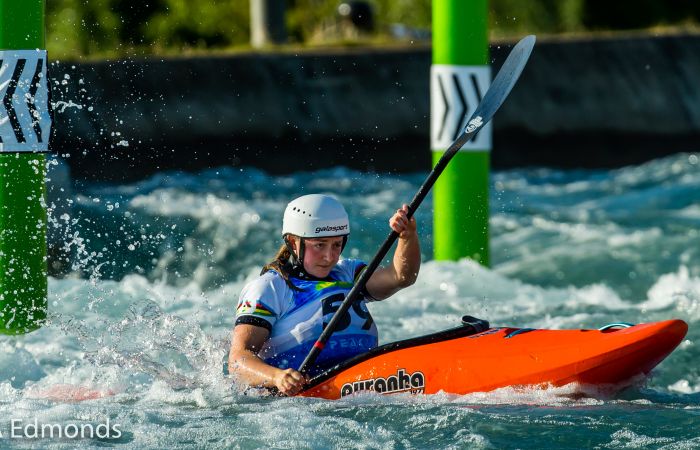 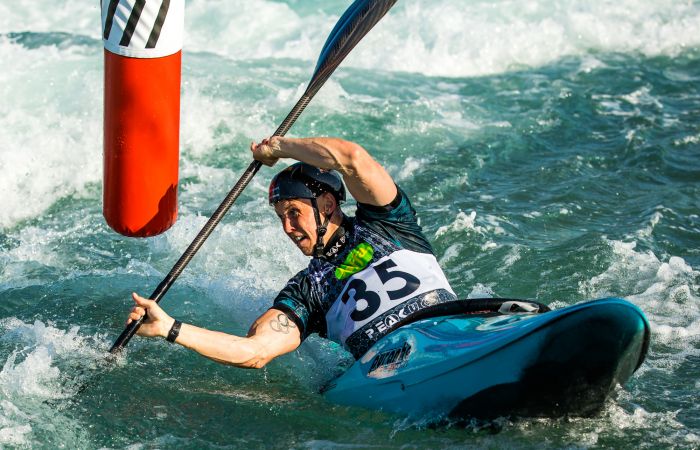 Top athletes were in action today as the senior, u23 and junior extreme slalom selection event took place at a sun-soaked Lee Valley White Water Centre.