On the hottest day of the year so far, the Wildwater Racing community headed to Holme Pierrepont for the British Open. With World Championship and World Cup selections also on the line, there was plenty to paddle for and the action didn’t disappoint.

Each boat had two runs, with the best run times being used to decide the final placings.

In the Women’s K1 event, Hannah Brown clocked an impressive 50.48 on her first run and went even quicker for her second to secure the senior title in a time of 50.24.

Molly Sandercock’s second run was 4 seconds quicker than her first and was almost enough to make the overall podium but it did secure her the gold medal in the U18s event and a bronze in the U23s.

Emma Christie and Kerry Christie completed the podium in the U18s competition taking silver and bronze respectively. They also combined to take the WC2 title in a time of 1:01.37.

Frederick Brown recorded the fastest two runs of the day as he took the Men’s K1 Senior and U23 title in a time of 46.01.

It was two silver medals for Jacob Holmes who finished second overall and in the U23 category. Robert Jefferies also made the podium in the senior competition, taking bronze. Francis Huntingford finished 4th overall and claimed the U23 bronze medal.

Huw Singleton and Leon Tomlinson took gold and silver respectively in both the U18 and U16 category. They were joined on the U18 podium by Thomas Merrifield who claimed bronze. In the U16 event it was Edward Butler who also made the podium.

Jamie Christie secured the V45s category to complete the medals in the Men’s K1 competition.

Peter Goode and Dave Williams battled it out in the Men’s C1 event but it was Peter who came out on top in a time of 1:08.15. The two also combined in the C2 to take the V60 title, narrowly missing out on the overall podium and finishing in 4th place.

The Men’s C2 title was possibly the most hotly contested event of the day. Cameron Bannatyne and Leon Tomlinson were 0.31 seconds ahead of Ryan Mallon and Findlay Mclean after their first run but after both pairs went quicker in their second run it was Ryan and Findlay who came out on top in a time of 54.16.

The two boats are both U23 and so also secured those medals, being joined on the podium by Harvey Merrifield and Thomas Merrifield. It was a clean sweep for Ryan and Findlay as their win also secured the U16 title, an event which saw the silver going to Huw Singleton and Edward Butler.

As the sun began to set, the top three athletes in each class and age group were awarded their British Open Championship medals.

The athletes on the podium in the senior events will now be considered for selection for the World Championships in Bratislava in September with the results also counting towards selection for the Treignac World Cup.

Congratulations to everyone for taking part and to the Wildwater Racing committee and volunteers for organising a fantastic event. 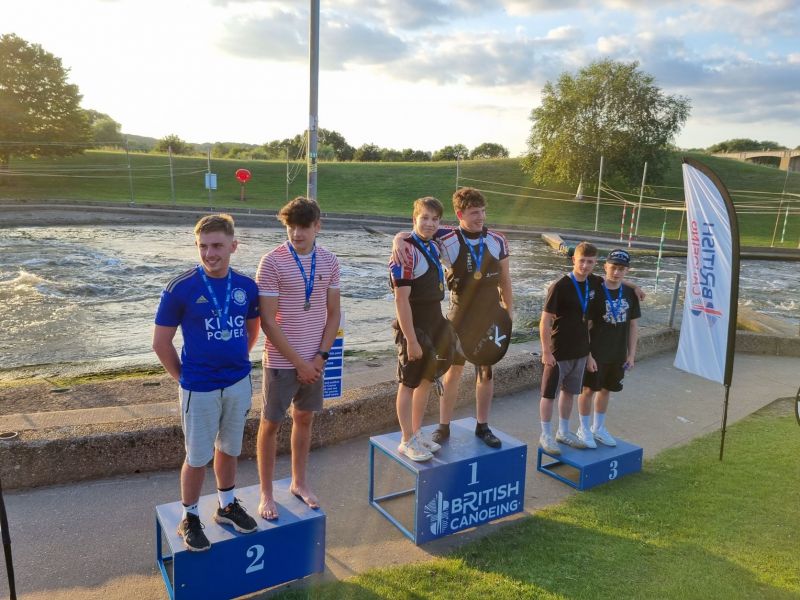