Over 50 titles were claimed at the British Open National Marathon Racing Individual and Team Championships, taking place at Reading Canoe Club over weekend.

As well as national titles and medals, the senior, under 23 and under 18 races also provided an opportunity for paddlers to seek selection for the Marathon World Championships taking place in Romania later this year.

In the Under 23 Men K1 Charlie Smith (Leighton Buzzard) continued his good form this season to claim victory ahead of Alex McIntyre (Chelmsford) and Luke Shaw (Norwich).

Anoushka Freeman (Richmond) took the spoils in the Under 23 Women K1 in another tight finish, with Rebekah Solway (Elmbridge) in second with Katie Brookes (Worcester) in third.

In the final race of the weekend, over sixty crews were on the start line for the Mixed K2.

Isla Bethune took a commanding victory by over a minute in the Under 18 Women K1, ahead of Grace Anderson (Norwich) in second and Klara Jepson (Falcon) third.

In the Under 18 Women K2 Emma and Kerry Christie (Break Out) recorded a comfortable victory ahead of Sienna Payne (Chelmsford) and Hannah Gallagher (Wey) in second and Norwich duo Tabitha Yull and Charlotte Le-May in third.

Zac Tarver and Luca Ferri made it an Elmbridge 1-2 in the Under 18 Men K1, with Ben Cabrera (Fowey) third.

In the Under 18 Men K2 Tarver claimed with second title of the weekend with Xavier Hinves (Southampton), ahead of Fowey pair Ben Cabrera and Joseph Railton, with Dominic Stanley (Falcon) and Luca Ferri (Elmbridge) third.


The Under 16 and under 14 paddlers were also hoping to impress the selectors for inclusion in the GB development team.

Gabriel Popham (Falcon) took the victory in the Under 16 Boys K1 in a tight race ahead of Harry Freeland (Reading), with Arthur Morley (Wey) in third.

Popham and Freeland joined forces for the Under 16 Boys K2 take the national title ahead of the Nottingham paiirng of Huw Singleton and Joe Enoch (Nottingham), with Haydyn Cooke-Bayley (Nottingham) and Dylan O’Connor (Richmond) third.

The Under 16 Girls K1 saw another close finish with Mollie Ball (Devizes) winning the gold medal, just ahead of Annabel Hutchinson (Reading) in second and Nerys Hall (Wey) third.

Nerys Hall combined with Wey team mate Greta Roeser to win the Under 16 Girls K2 with an impressive victory ahead of the Southampton crew Poppy Gilbert-Johns and Beth Perry.

Herriot and Toovey combined to take an impressive victory in the Under 14 Girls K2, with Sklenarova and Norwich team mate Estelle Widdows in second.

There was some great racing in the under 12, under 10 and mini events, with victories going to;

The K1 and K2 masters events ranged from the over 34’s up to over 69’s – with Brian Greenham (Reading) winning the over 69 Men K1 ahead of Robin Avery (Banbury).

Keith Moule (Chelmsford) claimed the over 39 Men K1 title and went on to win a second title in the over 34 Men K2 with Brett Irvine (Richmond).

There was also double success for Alison Chmiel (Nottingham), who won the over 54 women’s K1 and K2, the latter with team mate Caroline Jones.

Richmond won the women’s team trophy, and the Spanish Galleon trophy was claimed by Reading.

All the results from the weekend can be found on the Reading Canoe Club website. 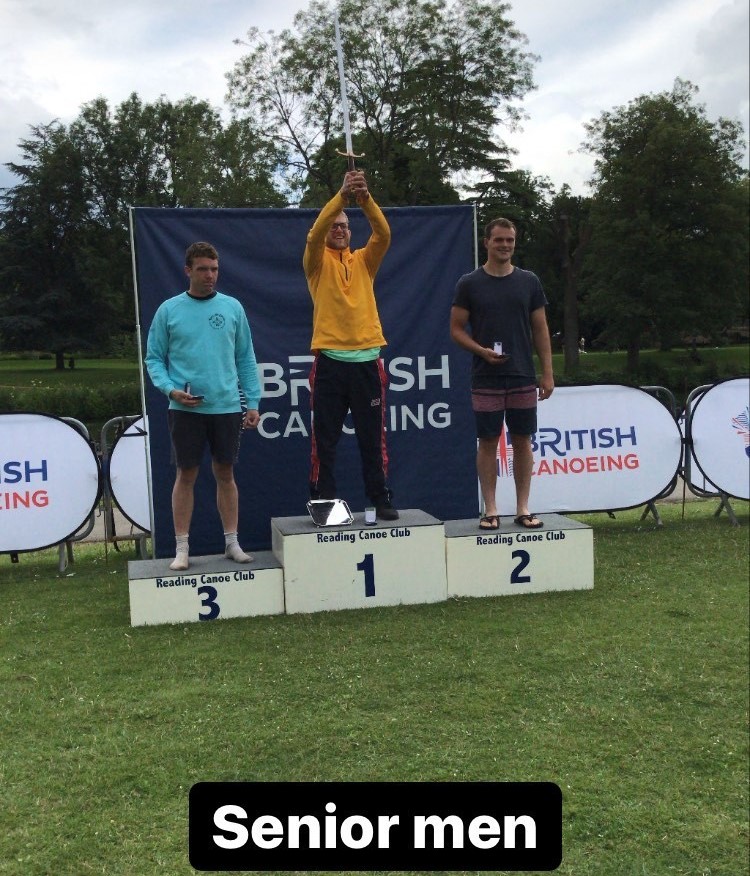