A small number of paddlers took part in the Paddle-Ability National Championships at Holme Pierrepont, Nottingham over the weekend.

The greatest number of competitors came from the 4As club in Newark, but there was also representation from Nottingham Kayak club and Linlithgow in Scotland.

5 Points were also scored for each Personal Best time that a paddler produces. This encourages paddlers who are not necessarily going to win, to keep trying to improve. As, if the gold medal winner doesn’t get a PB, the bronze medal winner, with a PB, scores more points.

Finally, 1 point is scored for each day of attendance at regattas throughout the year. This ensures that paddlers try to attend all the regattas, and not just for the trophies at the end of the year.

As there were so few competitors this year, it was decided to award only Junior and Senior overall trophies, regardless of gender.

The Junior trophy was awarded to Cassie Glaves (4As), who got the Bronze medal in all 3 of her K1 races. As Cassie produced PBs in all 3 races, she also took home the Most Improved Female award.

Most Improved Male Award went to Lewys Davies (4As), who was returning to paddling after an operation on his foot. He PB’d all 3 of his races, showing an improvement of over 4 seconds in his 500m race from Saturday to Sunday, and took home 3 silver medals.

Although they are not counted in the championship, the K2 races were hotly contested. Particularly the 500m on Saturday, where the difference from Gold to Silver was 0:2 of a second. Ultimately, the partnership of Jacob Hage and Cassie Glaves edged out Jacob Mansfield and Daniel Warwick in all 3 races.

Just to prove it didn’t go all 4As way, J Fisher (Linlithgow) got Gold in Saturday’s 500m race and Ian Radcliffe (Not) the Silver in the 500m on Sunday. 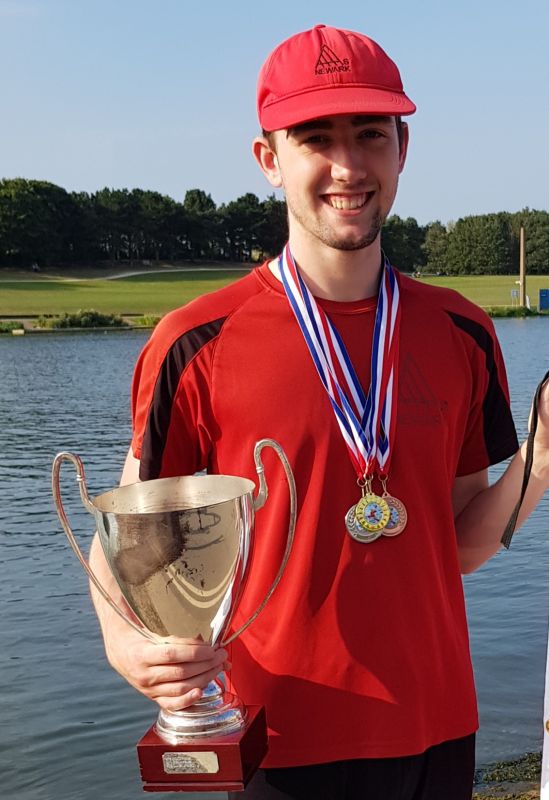