Liam Heath Inspires and is Inspired

Liam Heath MBE the most successful British Olympic paddler of all time helped to inspire whilst also being inspired himself when he joined a kayak ergo session at the Samson Centre for Multiple Sclerosis.

The Samson Centre for MS promotes physical activity as a major tool to combat Multiple Sclerosis. Due to the generous donations, the Samson Centre has purchased 11 kayak ergos which are used weekly as part of an exercise programme. The tempo was raised in the kayak ergo session when Liam Heath joined the group and demonstrated on the ergo his 35 second dash in Tokyo over 200 metres where he took Bronze.

The Kayak- First ergos gave Liam a great work out and he was inspired by the regular group of kayak ergo participants at the Samson Centre. Members of the Samson Centre who live with Multiple Sclerosis can experience the kayak movement getting an excellent cardiovascular workout, which is not achievable on other ergo machines. The Kayak – First ergos also provide significant benefit in engaging the core muscle groups and balance, the success of the programme which is unique in the country has seen a growth in participation amongst the 250 Samson Centre members, two kayak ergo groups now operate from the Samson Centre. Wey Kayak Club facilitate the ergo sessions with coaching support, sessions are under the 2wtachful eye of specialist neuro Physiotherapists and Rehab Assistants.

After the 35 second challenge, Liam who confessed to being out of breath, went on to share his experiences racing in London, Rio and Tokyo Olympics. When asked which was the most precious medal, he replied “all, although each one had its own story of commitment, sacrifice and pleasure”. Liam discussed his journey from starting kayaking at Wey Kayak Club when 11 years old through to his Olympic successes. Liam encouraged his fellow kayak ergo paddlers to join him in wearing his Olympic medal not just his Tokyo Bronze, but his Gold and Silver from Rio and the Bronze from London. Liam added that the London Olympics was the most nerve racking, the build-up, the crowd, the noise “it was so loud I couldn’t hear my paddles hit the water or my own breathing” he added.

Jackie Payne, the Samson Centre Manager added “it’s a real treat to have Liam join us, the kayak ergos like so much of our equipment and services provided for people living with Multiple Sclerosis is only made possible through the generous support of grant making trusts such as the Hewer-White Trust and WSP Foundation.” 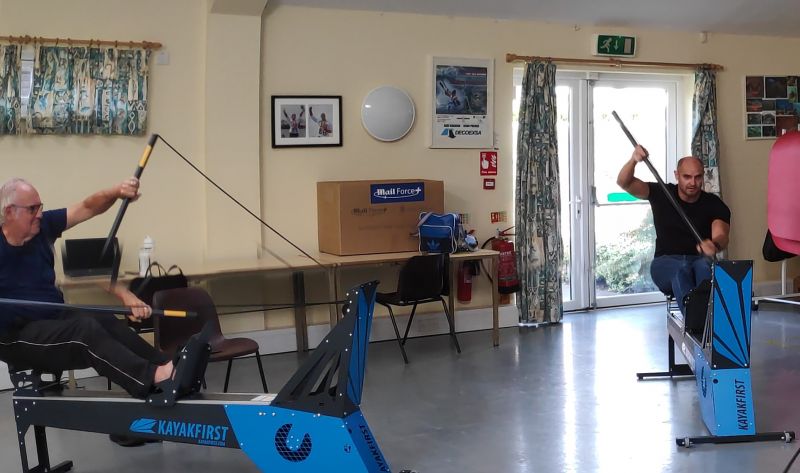