A return to racing at June Sprint Regatta

This weekend saw the return of the racing community to the National Water Sports Centre in Nottingham, with over 200 athletes from 42 clubs competing at the June Sprint Regatta.

For some of the club athletes it was their first taste of competitive sprint racing for nearly two years, with the regatta operating under new measures put in place to ensure a Covid safe event.

There was glorious weather on Saturday for the under 18 and under 16  events.

In the first final of the weekend Becky Pemble (Addlestone) took a commanding victory from lane 5 in the Girls K1 1000m, ahead of Elise Montagna (Royal) and Jessica Urquhart (Banbury).

In the Girls K1 200m Grace Anderson took her second victory in a tight finish ahead of Alexandra Armstrong (Scottish Performance Squad) and Amy Green.

The Girls K2 500m saw a commanding victory by the Scottish Performance Squad pairing of Alexandra and Kristina Armstrong, winning by over six seconds in a time of 1:54.98.

In one of the tightest races over the weekend Hinves pictured claimed the victory in the  K1 500m in 1:55.40, just 0.2 seconds ahead of Tarver in second and Cabrera once again in third.

Tarver and Hinves also joined forces in the K2 500m to finish ahead of the Norwich pair Toby Booth and Ben Want.

In the Boys K1 200m there was a local winner with Haydyn Cooke-Bayley (Nottingham) taking victory ahead of Dylan O’Connor and Gabriel Popham-Coveley.

In the Girls U16 events Greta Roeser (Wey) took a commanding victory K1 1000m, ahead of Isla Bethune (Elmbridge) and Annabel Hutchinson (Reading).

Kristina Armstrong (Scottish Performance Squad) took the victory, crossing the line in first place in the Girls K1 500m, ahead of Greta Roeser in second and Isla Bethune in third place.

In the Girls K1 200m Kristina Armstrong recorded her third victory of the weekend, winning a commanding race in a time of 48.18 ahead of Iona Patrick (Scottish Performance Squad) and Nerys Hall (Wey).

The paracanoe athletes competed across both days of the regatta, as part of their preparations for the World Championship selection event in July and the major competitions later in the year.

The following day Emma claimed her second win, this time in the Women’s VL2 + VL3 200m, in a time of 57.65, ahead of Jeanette Chippington and Beth Fisher.

Jack Eyers and Stuart Wood went head to head in the men’s VL3 200m, with Eyers taking victory by less than a second.

Laura Sugar, Hope Gordon Rob Oliver, Jonny Young and Dave Phillipson all competed in the heats of the men’s and women’s Open K1 200m, with Laura and Hope finishing fifth and eighth in the women’s A final, and Rob in seventh place in the men’s B final.

Lusty then joined forces with Lewis Fletcher to win the Men’s Open/U23 K2 500m, ahead of Dan Atkins and Trevor Thomson.

In the Women’s Open/U23 K1 200m it was Enya Dale pictured who took the spoils in a time of 42.93, with Lucy Lee-Smith (Norwich) in second place and Abi Burgess (Wey) third

The canoe events all took place on Sunday. In the Canoe Men Open/U23 C1 1000m Thomas Lambert (Lincoln) in lane 4 and Arthur Leech (Richmond) in lane 5 went head to head down the course, with Leech taking the victory by less than two seconds in a time of 4:06.50.

Thomas Lambert pictured had the upper hand and took the spoils in the Canoe Men Open/U23/18/16 C1 500m with Arthur Leech in second place.

In the Canoe Men Open/U23/18/16  C1 200m George Bell (Fladbury) took the win, finishing a second ahead of paracanoe athlete Jack Eyers in a Va’a, with Hou Lei (Nottingham) in third place.

One of the closest races over the weekend was in the Paddle-Ability K1 500m where Jacob Mansfield secured victory by just 0.15 seconds ahead of Jacob Hage.  Mansfield claimed a double by crossing the line first in the K1 200m.

Jacob and Jacob competed in the races alongside Cassie Glaves and Daniel Warwick, all representing the Adventure Activities For All Abilities club based in Newark, and coached by Julie Gray.

The Masters events also took place on the Saturday.  In the women’s events there was a hat-trick of victories for Suzanne de Bruijn (Norwich) in the K1 1000m, 500m and 200m, ahead of Catherine Drummond (Reading) and competing in the over 54 category Sally Alexander (Addlestone)

Neil Blackman (Royal Leamington Spa) claimed the Masters over 54 double in the K1 1000m and 500m.  Richard Kent (Southampton) was second in both events, before taking victory in the over 54 K1 200m.

Munich 1972 Olympian Robin Avery was the oldest competitor at the regatta and competed in all three masters events in the over 64 category.


Coverage of the June Sprint Regatta is available on the Sprint Racing Committee YouTube Channel.

Further details and the official results can be found on the Sprint Racing Committee website. 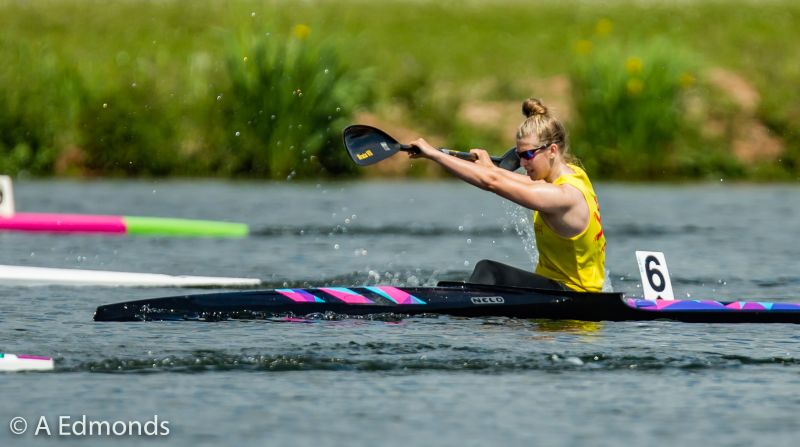