Our latest blog for the Clear Access Clear Waters campaign comes from Derek Billings, an Education Ranger on the Lulworth Estate down in Dorset, and avid sea kayaker with a passion for protecting the beaches and seas he calls home. Recently Derek, along with several volunteers, friends and fellow kayakers, took to the waters and beaches to undertake some much needed post lockdown cleaning on the Dorset coast.

Those of you who have paddled along the World Heritage Site; The Jurassic Coast, will have no doubt been impressed by its varied geology, stunning landscapes and incredible prehistoric story. However, that 250 million year old history has a new chapter. A chapter of disregard. Almost being a victim of its own success, coupled with a post-lockdown frenzy, it has been inundated with a new demographic of visitor who have seen the coastline as a party environment.

One of the most famous parts of Dorset and East Devon’s Jurassic Coast is Durdle Door; a natural limestone arch that attracts hundreds of thousands of visitors every year (and is impossible not to paddle through if you are kayaking by). Increasingly, these visitors are unaware of the rolling countryside that Dorset possesses, and thus expect to walk from the carpark straight onto the beach. This is not the case here. It is at least 15 minutes to the beach… more if you are carrying cool boxes full of beer and food. Sadly, the remains of these are often left on the beach from the mere thought of having to carry them back uphill.

The Lulworth Estate (which Durdle Door beach is part of) have staff tackling the issue every day, but even then the problem can sometimes be too much to handle. Hence, we (myself being a Countryside Ranger as well as a keen sea kayaker) have engaged with local users of the site to help combat the litter problem. One of the most obvious groups were kayakers. On July 22nd, in perfectly calm conditions, 13 volunteers set off in their sea kayaks to clean some of the less accessible beaches that never get a look in with normal litter picking projects. 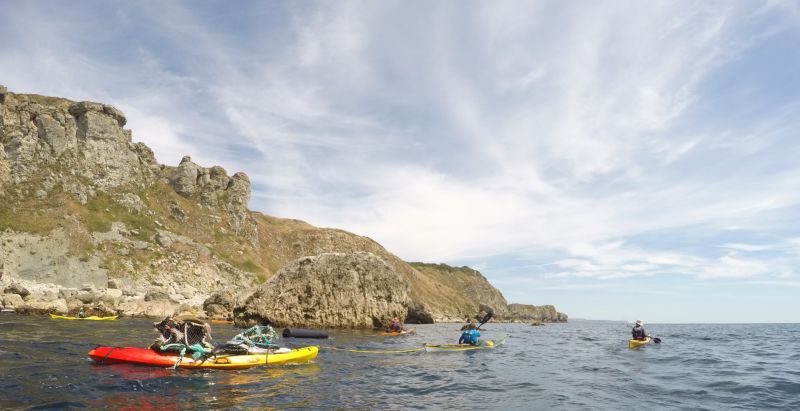 Three beaches were visited; Middle Beach, St Oswald’s Bay and Dungy Head. The volunteers, some who came from as far away as Bath, did an outstanding job and in great spirits. With a sit-on-top kayak acting as a rubbish trailer, we managed to remove a couple of beached lobster pots, a detached mussel buoy, some waterlogged seats from a recently sunken vessel, black sacks that a beachgoer had kindly bagged up, and other paraphernalia that couldn’t fit into our hatches. In total we filled about six large bin liners to accompany this.

The Estate is well known as part of the Jurassic Coast World Heritage Site, but it is also protected on a number of different levels; it has two SSSI’s, a Special Area of Conservation, 15 Scheduled Ancient Monuments, part of the Heritage Coastline & the Dorset AONB and is one of only five UK locations that hold a European Diploma for biodiversity. Yet our current culture is trashing this place. If you want to be part of the solution, we are always looking for more volunteers. We have a network where we call on local people to assist when litter problems escalate beyond our control. If you want to help, please email [email protected]