Back in June 2017 an email popped into our British Canoeing inbox. Andy Sutton wanted to know if anyone who was paraplegic had completed our Three Lakes Challenge. We were instantly intrigued.

The Three Lakes Challenge takes in the longest lakes in England, Scotland and Wales, a grand total of 43 miles. Bala in Wales and Windermere in England are not easy paddles but Loch Awe is a whole other level of difficulty. 25 miles long and almost a mile wide in places, it is exposed, stunning and in poor weather, a brutal paddle.

Andy’s email explained that he has a rare spinal cord tumour. Before it took away any more of his mobility, he wanted to take on a big challenge, giving himself and his family something to be proud of.

I am paraplegic but paddle with Rutland Canoe Club at Rutland Water. I’m a 2* paddler, with pretty good upper body strength. My condition is progressing and I’m pretty certain I won’t be able to paddle in a couple of years But...I was always a keen sportsman in the past and would love to achieve one more physical goal before I’m unable to.

– Andy Sutton in his first email to British Canoeing

Meeting with Andy in July we were immediately struck by his huge enthusiasm as well as the depth of emotion behind his desire to complete the challenge. Andy uses a wheelchair most of the time and keeps fit by paddling and hand cycling. His strength of character and drive had us pretty well convinced but it was the strength of Andy’s handshake that really proved his mettle.

We met with Andy and his wife, Debbie, again this time introducing him to Johnnie Young, GB Paracanoe athlete and 2017 World Champion in VL3 200m and Paracanoe coach Steve Train. Andy had come to British Canoeing for advice and support but it quickly became clear that he could accomplish this challenge by his own drive alone.

Sometimes you just meet someone and think ‘this is a good person, I want to get behind what they are aiming to achieve'. Andy was one of these people.

Months of training followed, with Andy (with the help of family and friends) setting up the Broken Body of Water Facebook page, Instagram and website, to help start his fundraising mission for the Queen's Medical Centre Hospital in Nottingham.

In the past people have taken on the Three Lakes Challenge over a variety of time periods - from 24 hours to 2 years. Andy had chosen to go with the harder end of the scale and complete it over 2 days. The date was set for the 16th/17th June 2018. The challenge was on!

As the challenge date approached changeable weather was forecast. The team were not to be deterred however. Here Andy tells us the story of how his challenge unfolded:

'I had been training with Pete Dunlop over the winter of 2017/18, on the River Trent, at Rutland Water and on Windermere. Unfortunately, Pete was unable to paddle the actual event, so Kevin Spiers, Andy Seager, Steve Winship and John Thomason (Loch Awe leg only) agreed to step in and join me. Unbeknownst to me at the time, they had even practised righting an overturned boat with the paddler still in the cockpit.

My boat is a plastic Valley Etain, with the rest of the team using single composite sea kayaks. I was also using my homemade Greenland Stick, the perfect paddle for me as it reduces the pressure on my shoulders, elbows and wrists.

Starting at Torran Bay, we launched from a gentle grassy slope into shallow water, under heavily overcast skies, which quickly descended into rain for the whole duration. With a film crew in tow we tracked up the east side of Loch Awe, avoiding the worst of the wind and giving Chris Pavey of Growmotion a chance to capture some good footage.

The weather may not have been perfect but we were still lucky enough to spot 9 osprey, several goosander and curlew, as well as swifts and swallows all along the route.

Making good progress, with just three short stops along the way, we finished in 6hrs 30mins.

The unloading process at Kilchurn Castle was made difficult by the rain becoming torrential just as we got off the water. I hauled my wheelchair along the uneven path to the car, avoiding an irate Australian with car parking issues, before we set off on the drive to Windermere.

The team had agreed to a slight lie in and a 6am start. Getting on the water at the Newby Bridge end of Windermere with a slightly warmer 12-14C and a light SW wind at 6mph. I have some slight stiffness around my upper shoulders and neck from the previous days efforts but nothing major.

We enjoyed another good paddle, with only one short stop for some drone footage to be shot and a snack. A paddle time of 2hrs 21mins saw us reaching Ambleside at 8.20am, just in time for breakfast before hitting the road for our final lake.

Arriving at Bala to a stronger SW wind at 14mph, with 24mph gusts, the team used a grassy slope to get on the water at 13.30.

Bala is an out and back trip and we battled gusty conditions to the far end of the lake, in the knowledge that we would have great surfing opportunities for the push back to shore. Resting briefly to appreciate the final leg to come, we headed for home, returning in 1hr 56mins.

I have achieved my goal and become become the first disabled paraplegic paddler to complete the Three Lakes Challenge! I’m hoping I’m also the first to complete it using a Greenland Stick.

Our final figures came out at a total paddle time of 10hrs 45mins, achieved in 34hrs 26mins with driving time. This was significantly shorter than my original predictions of just under 20hrs paddle time and 40hrs total travel time.

I really want to say a big thank you to Loch Awe Boats and the Bala Adventure and Water Sports Centre for the use of their boats for on water filming. Also thank you to British Canoeing for their generous support during the build up and Pete Dunlop through the winter training.

A huge thanks must also go to Andy Seager, Kevin Spiers and Steve Winship for their wonderful support on all three lakes; to John Thomason on Loch Awe and especially to Judith, Joy and Suzanne who have all given up annual holiday and their weekend to provide fantastic support both on the road and in the pub.

I owe a debt of gratitude to my family; Debbie, Lorna, Abi, Simon and Adam for their unending support and humour, not forgetting grandson Bodhi for providing the cute factor all the way through.

The challenge is certainly possible for people with disabilities provided you have the back up and support of a good team. I hope this story might inspire other disabled people to take up the sport of kayaking or canoeing. It has given me a freedom of movement and access that I thought had gone forever. I can now get closer to the plants, birds and animals I love so much than I ever could on crutches and in a wheelchair. With the support of Rutland Canoe Club I have found friends and support that have given me a new lease of life.

My message to everyone is: Get Out There And Do It – In A Kayak!’

In the British Canoeing offices we were following Andy’s challenge avidly and were delighted to see him complete it with such panache.

We were keen to meet him again and hear more about how he got on. Once again the emotional side of this challenge shone through, as well as the amazing love which makes Andy and Debbie such a strong team.

We asked Andy a few questions about the challenge. Watch below for what he had to tell us.

If you would like to find out more about Disability Canoeing and discover local clubs which deliver Paddle-ability sessions click here.

Fancy joining Andy on the Three Lakes leaderboard? You can discover more about all the British Canoeing challenge routes here. 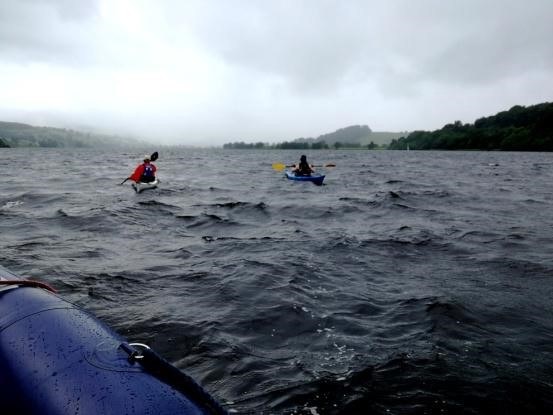