Every year British Canoeing celebrates the fantastic achievements and contribution of our coaches and leaders, and sets out to recognise those who help to make our sport what it is today.

This years event was held at Eastwood Hall in Nottinghamshire as part of our annual Coaching and Leadership Conference. Britain's most successful Olympic medallist Dr Tim Brabants MBE was in attendance to honour our winners and present the awards.

Congratulations to all of our winners at the 2017 Awards ceremony. Below you will find a little more about each of the winners from the night and look out for official photos and videos from the event on social media in the coming days.

Chris has been at the leading edge of coach development over the past year. Not only does Chris introduce others to the fascinating world of paddlesport coaching,  his influence has seen many coaches and leaders that had left the sport re-engage, highlighting his contagious enthusiasm, and his instrumental role in delivering a full suite of provider awards for British Canoeing.

“I’m really grateful to receive the award in recognition of what I've been doing over the past 12 months and I’d like to show recognition to all of those who've had an impact on my development as a coach.

Daniel started at Devizes Canoe Club assisting to run junior sessions in 2013 and is showing no signs of wanting to stop. Without Dan the club wouldn’t be where it is today and his role as a coach, offering Saturday junior sessions has helped the club to retain more members.

Daniel, who’s been described as ‘central to the clubs junior programme’ was  recognised for his commitment and dedication, and would travel back from university every Wednesday without fail to commit to coaching junior paddling, even taking annual leave from his work to run summer camps. Club coach Trevor Hunter added ‘Nothing is too much trouble for Dan, he’ll always say yes.”

I’m honoured to receive this award. I don’t do it for myself, I want to give my time to others and to give them the opportunity to come and try canoeing.

Over the past two years Dave has taken the Under 21 Great Britain Canoe Polo team to World and European Champion success. It’s clear that Dave’s behind the scenes work coaching the team on and off the water has added to the great successes the team has celebrated.

Dave’s coaching excellence has shone through and accolades galore were received following the World Championships about what great sportsmanship he has created in the team.

I’m overwhelmed to receive the award, i certainly didn't expect it and for those who put me forward thank you. I enjoy when we win but making sure the team develop as individuals and grow really gives me something.

Pat has worked to ‘galvanize’ the programme at Bideford Canoe Club, introducing river trips, surf sessions and coastal trips. On top of this he runs inclusive sessions, coaching individuals with disabilities.  Pats ability to engage with young paddlers new to the sport and the links he has made with a local youth centre has seen him gain enormous respect from his club members. Through his coaching he has inspired many to take part in canoeing in his community.

I enjoy taking people down rivers and making sure they are safe. It is nice to have recognition but none of this would be possible without the structure of the club and the people who spend a lot of time here.

A surprise award given out during the evening was an Outstanding Services Award to Doug and Lara Cooper.

Lara has been involved with British Canoeing from 2003, working on Long Term Paddler Development research, then moving into the role of English Coaching Manager for a number of years and has since been instrumental in the development of many awards over a 15 year period, as well as currently being the programme manager for the Level 4 Coaching Diploma.

I'm blown away, I never saw it coming or expected it. I'm involved because I love it and didn't expect to win this at all.

To win this award was a lovely surprise and although we do this for the love of it, it's really nice to be recognised for the work we've done. 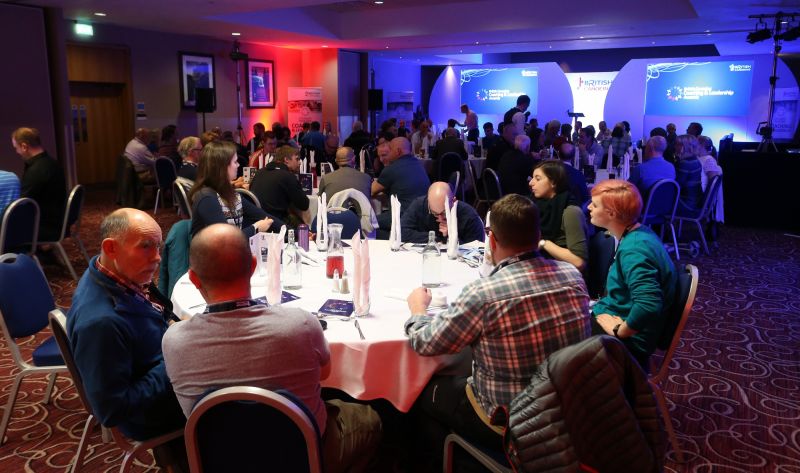