A Canine First for the Three Lakes Challenge

Our latest adventure seekers; Chris Moore and Ilona Ulme, chose to take on our Three Lakes Challenge with a four legged friend for company.

Kaycee the Jack Russell became the first dog to complete the challenge, taking a few dips in the water along the way.

Below, Chris tells us all about their Three Lakes story...

Journey to Scotland for the Three Lakes Challenge

We left Norwich at 10.00 pm on Sunday 30th July 2017. After a few stops to refuel both the car and ourselves we finally arrived at a little town at the castle end of Loch Awe. The weather was not in our favour and hadn’t been for most of the drive up. We decided to head to the railway station car park, to see the jetty which would be the finish of our route if we set off from the other end of the loch.  A walk across the railway bridge bought us to a spectacular view of the loch.

From here we decided to go to the Castle area and look around as that was also an option for our launch. Wow! What a view and an ideal place to start this challenge. We met the lady who owns the land around the castle and had a  good chat with her about the dangers of the loch. We reassured her that we had the appropriate equipment including, 5 mm wet-suits, life jackets, spare oars, food and drinks. She warned us of the dangers and made us aware people had lost their lives on the loch in the past.

Despite the rain we were keen to get started but after the long drive we thought it best to find our hostel and rest. We thought it would be simple enough to find, it’s the other end of the lake! En route we wanted to grab some lunch so we visited a little town on the edge of the coast.

Back in the car, we set the sat nav and away we went; simple. Oh no, not in Scotland it isn’t, especially around the lochs. Sat navs do their own thing here, tell you that you are one place but you're actually nowhere near it.

Finally we grabbed a map from the back seat and navigated, via Ilona's map reading skills, arriving a good couple of hours later. The icing on the cake was watching an article on the local news that night on sat navs not working around the lochs!

We woke to a cloudy, cool morning. After breakfast it was time to set off from the Torran Bay hostel. The drive round to the other side of the lake was a simpler journey than the previous days escapade, probably down to a good sleep and a map. Here we unloaded our motorcycle from the trailer, this would used later in the day to allow me to collect the car.

Back at our start point we were met by more rain and a light breeze causing a ripple on the loch. This would soon change. We launched our sit-on-top kayaks, on Loch Awe at 10.20 am. For a while we played around taking photos, laughing and chatting about what we were about to undertake.

Getting underway properly the wind began to freshen and as the loch opened up, it blew straight at us at around 10-15 mph. After 4-5 miles the wind speed had risen to around 15-20 mph and we hit the first of many rain storms we would encounter. It became obvious we had a mammoth task ahead of us.

With every rain storm came more wind and at one point we were hardly making any headway. The waves had also risen to make it an uncomfortable adventure. Due to the weather conditions we decided to knuckle down and just get the paddle out of the way with minimal stops. Although physically hard on us, this was a wise move due to the time it took us.

The scenery was spectacular and we even spotted eagles around three miles from the finish. The weather didn't allow us time to enjoy this as much as we would have liked. We expected to do this loch in seven to nine hours but it took us 10 hours 50 minutes.

Would we do it again? Well, out of the three lakes in the challenge, this is the one we are going back to next year. This time we will be going for a week, with our Canadian canoe, so we can enjoy it properly, get some fishing in and also spot those eagles again.

After a good nights sleep I was up at five the next morning. A bite to eat and I set off to collect the car and trailer. What a beautiful morning it was. With the mist rising off the loch and the trees, it will go down as one of the prettiest bike rides I have ever done. With the car collected, we loaded our gear, said our goodbyes and set off for the Lake District and Windermere.

Once again, we had a wet journey, as we drove out of Scotland. Arriving at the Lake District mid-afternoon, we headed straight for Windermere for a recce. The area is clearly very commercialised and totally different to the wilderness of South West Scotland. Finding a campsite to stop at, we pitched our tent ready for the second part of the challenge.

The next morning we woke to yet more wind and rain, however this time the wind would be behind us, so we decided to wait and see if it eased. By lunchtime it had cleared but the wind was still blustery. I took the motorcycle to the finish point car park before driving to Fell Foot car park.

From here we set off at 12.50 pm, on Thursday 3rd August for the second leg of our challenge. The wind was behind us for what turned out to be a very enjoyable and relaxing paddle along the eleven mile length of the lake. We stopped once for a little leg stretch and to let Kaysee the dog have a  run, then continued the course. Ilona spotted an otter a few yards from her kayak and screamed so loudly with excitement that it dived under the water. All I saw was the water ripple where it had been.

Windermere is a very busy lake, with lots of tour boats going up and down and many clubs and hire centers along the shore. I would imagine if the wind had not been so strong it would have been even busier. Despite the lovely surroundings, it is not on my to do list again.

We completed Windermere in 3 hours 45 minutes. and stored the kayaks in the car park. After a quick change into dry gear I rode the bike back to Fell Foot to collect the car and trailer while Ilona waited with the gear. Then it was back to the campsite for a bite to eat and a decent sleep before our drive to North Wales and the final lake in the challenge.

We woke on Friday to a fine morning, packed the tent up and headed off for Lake Bala. It was a tedious drive with lots of slow traffic until we got close to the lake. The lake is not well sign posted and the best direction we got was ‘go to the centre of town and it’s near the co-op’! We chose the wrong car park first but after a quick look over the fence, soon spotted the right one.

There was lots of space to park and we found a very family orientated lake, with a friendly canoe hire centre. The warden of the lake is chatty and helpful. Launching at 3.00 pm, we had a stiff head wind for the paddle out.  With this in mind we stuck to the shoreline of this pretty lake.

There was a lot of activity from other craft and a group of sea cadets were on a sailing course at the far end, which was nice to watch. Reaching the far end, we got out for a few photos before heading back with the wind behind us. This time travelling straight down the middle to make the most of the wind and waves. We arrived back at our start point in 2 hours 50 minutes. A great end to a very hard but enjoyable challenge.

Yes, it would have been better without the wind and rain but we did it and are now looking for our next canoeing adventure. We have two weeks hiking through the Pyrenees in Andorra at the beginning of September this year so, once that’s done, we will  start to plan what’s next!

There are now five British Canoeing challenge routes. If you are looking for an adventure of your own you will find the perfect challenge for you on our Challenge Route Pages. 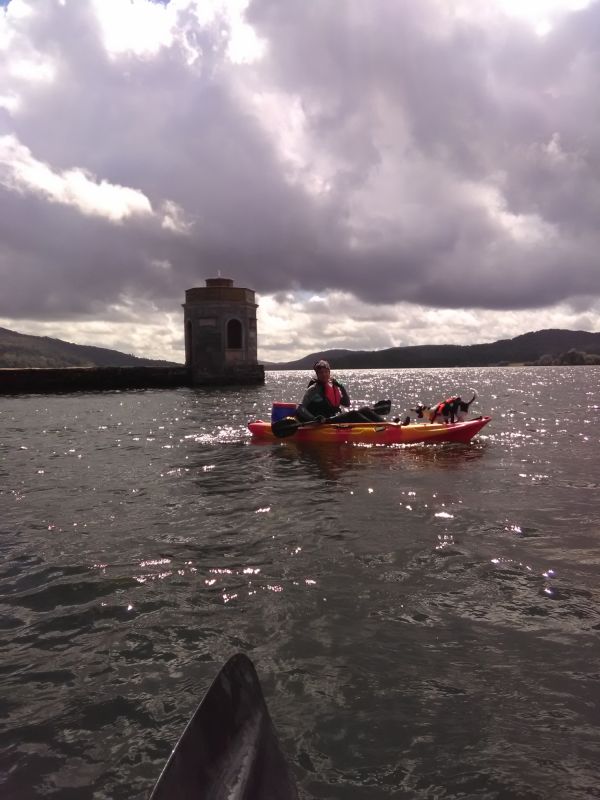